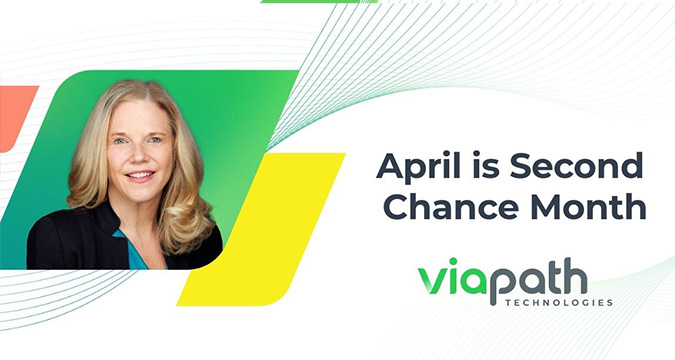 THE FORGOTTEN CANDIDATE NEEDS OUR SUPPORT IN APRIL – AND BEYOND

Since 2017, April has been designated “Second Chance Month” – shining a spotlight on the belief that the best strategy to keep individuals out of jail after they serve their time is to give them opportunities to fully reintegrate into society. But I’ve always believed that these forgotten candidates deserve more than 30 days on the calendar.

At ViaPath, we walk the walk, encouraging successful reintegration not only through life skills and job placement programs for the incarcerated, but through our own hiring of the formerly incarcerated. We’re even partnering with other organizations around the country to magnify our impact.

We also see this issue from every angle, as we help transform corrections facilities and processes in the US and abroad, while working to decrease the chances that individuals will end up re-incarcerated. This is done through education, training, and technology. Our country’s record-breaking incarceration rates are nearly matched by exceptionally high recidivism rates—a seemingly unbreakable cycle due to lack of employment opportunities that we need to help change.

That’s where we can all truly make a difference in April, and beyond.

Thankfully there’s been hope and progress. For example, since the “Ban the Box” campaign was launched in 2003, a large number of corporations have stepped up and removed the question “Have you ever been convicted?” from their hiring applications. In addition to ViaPath, other corporations include Starbucks, Facebook, Walmart, Target, and Uber to name a few. This simple change to employment applications is making a big difference in increasing opportunities for individuals with a criminal record to be seen as qualified candidates and ultimately, get hired.

Which brings us back to that word: “chance.” It’s not risk or luck. It’s actually an opportunity, that starts with supporting these often forgotten candidates. In this case, the opportunity for individuals to reunite with their families, restart their futures, re-gain their dignity, re-enter society on solid footing, and re-engage with their communities in a positive way.

For companies, it’s an opportunity to diversify their teams and replenish a workforce that’s been shaken over the past two years. But like the “Ban the Box” campaign – it takes time. It also takes action and effort on our part.

Whether you’re a family member, friend, or prospective employer, starting over starts with you.

So, while we kick things off in April by shining a light on second chances, I firmly believe that we should do all we can to break the cycle of incarceration and foster these opportunities all year long. Because second chances – like any life-changing events – can happen at any time.

For over 30 years, ViaPath has worked side-by-side with correctional facilities and government agencies to provide imperative technology solutions to over 1.2 million incarcerated individuals across the globe. These solutions facilitate meaningful connections, provide educational opportunities, enable successful reintegration, and strengthen operational efficiency. ViaPath is headquartered in Falls Church, Virginia, with an employee presence throughout North America and was recognized as a 2021 Top Workplace USA by Energage.